Theresa May has announced she is to directly oversee work to develop a new law to tackle domestic violence, developed to end the current “unacceptable” situation which sees some areas of the country put more effort into the problem than others.

The Prime Minister said domestic violence and abuse is “life-shattering and absolutely abhorrent” and insisted the Government’s new approach would deliver a system that increased convictions and works for victims.

As a result, the Domestic Violence and Abuse Act will be aimed at addressing a lack of clarity in existing laws and raising public awareness of the problem.

Ms May said it was “something I have always attached a personal importance to, both as home secretary and now as Prime Minister.”

She added: “Domestic violence and abuse is a life-shattering and absolutely abhorrent crime; tackling it is a key priority for this Government.

“I am clear that we need to build on the measures I introduced as home secretary – including the new offence of ‘controlling and coercive behaviour’, Domestic Violence Protection Orders, and the Domestic Violence Disclosure Scheme – and ensure that no stone will be left unturned in delivering a system that increases convictions, and works better for victims.”

The moves come amid concerns in No 10 that the legal system often lets down victims, partly because the plethora of different offences and procedures that currently exist had resulted in a postcode lottery.

Aides said the lack of clarity in the system had created an “unacceptable diversity” in terms of the degree of effort put in to try and tackle it, with inconsistency in the way laws and measures had been applied. 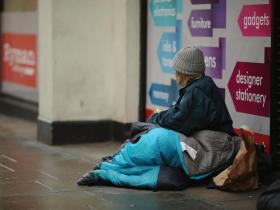 Homeless women turned away by local councils for emergency housing

Ms May will oversee a cross-Government effort to improve the situation. The work, which is expected to take up to 18 months, will also hear the views of victims, charities and legal experts, but Mrs May is understood to be keen that any “quick wins” identified in the project could be acted on in the interim period.

Mrs May said the plan had the potential to “transform the way we think about and tackle domestic violence and abuse”.

She said: “There are thousands of people who are suffering at the hands of abusers – often isolated, and unaware of the options and support available to them to end it.

“Given the central importance of victim evidence to support prosecutions in this area, raising public awareness – as well as consolidating the law – will prove crucial.”

More than 100,000 defendants were prosecuted for domestic abuse in 2015-16, with over 75,000 convicted – the highest volumes ever recorded – but there are concerns that not all victims feel prepared to come forward.

Director of Public Prosecutions Alison Saunders said: “Domestic abuse is a particularly distressing crime as it often occurs in the place where people should feel safest – their home.

“We welcome the programme of work the Prime Minister has announced in this important area and we will play a full part.

“A domestic abuse case is more likely to be prosecuted and convicted today than ever before.

“However, we know this crime is often under-reported and therefore any new initiative which encourages victims to come forward is to be applauded.”

The initiative was also welcomed by charities and groups supporting victims.

Women’s Aid chief executive Polly Neate said: “There is scope to make the legal framework surrounding domestic abuse clearer and more comprehensive; survivors desperately need an approach across all agencies that genuinely responds to their needs and helps them to truly recover.”

Refuge chief executive Sandra Horley said she hoped the new law “will bring the sea-change that is needed to give victims the protection they need and deserve, and end domestic violence once and for all”.

Victims’ Commissioner Baroness Newlove said: “These long awaited changes will ensure those vulnerable victims and survivors are listened to and that they feel able to come forward and speak out against their abusers.”

NSPCC chief executive Peter Wanless said it was “absolutely crucial” that the specific needs of affected children were prioritised.